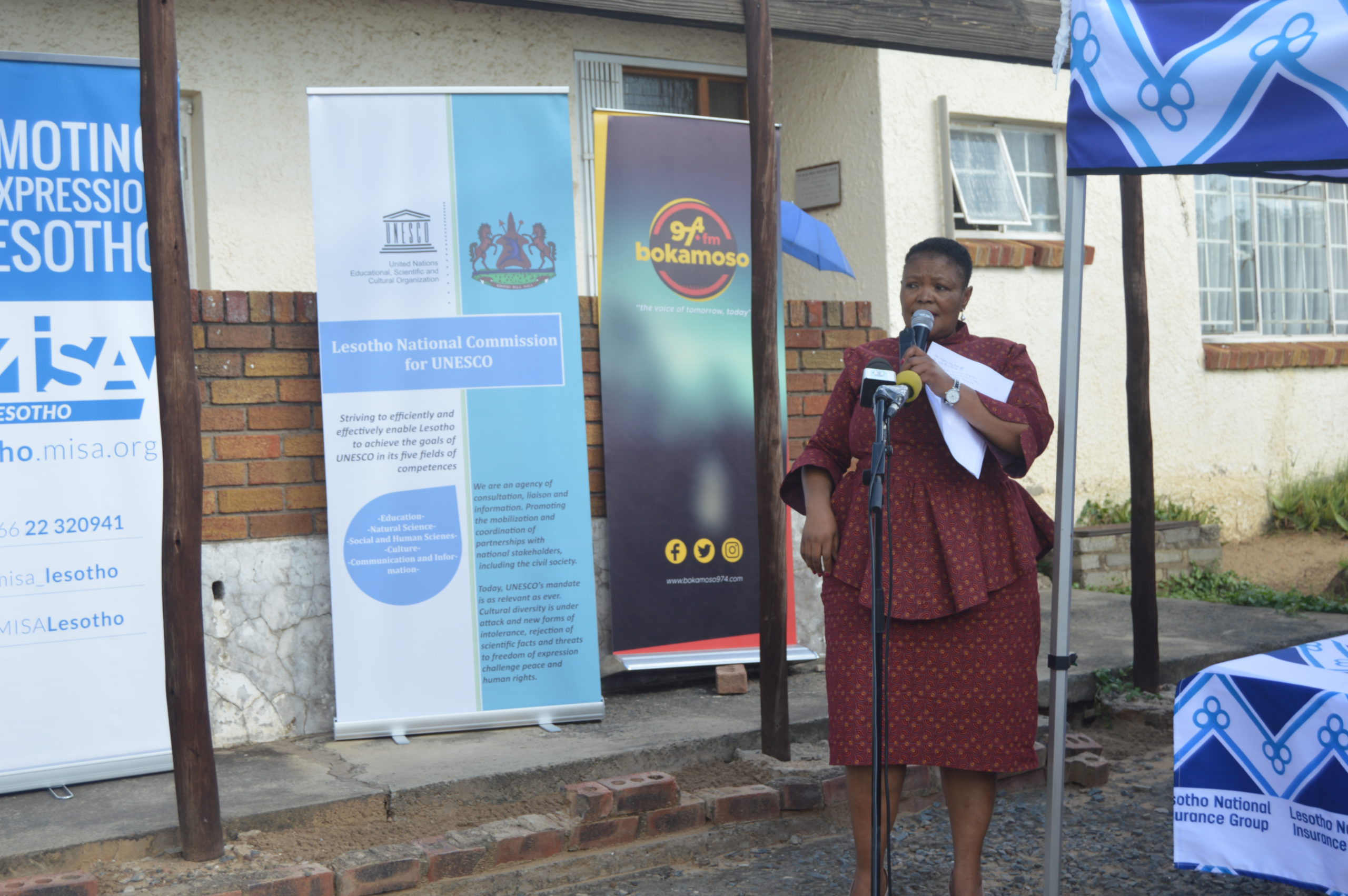 Minister of Communications Science and Technology Thesele ’Maseribane has decried lack of professionalism on radios, which he ascribed to opinion reports that are dressed as facts “which are clearly targeted at discrediting all efforts of the government”.

Also to highlight the day, MISA Lesotho organised a press club and the events saw massive attendance of personalities from various sectors of radio production.

Quoting from the minister’s speech, Ms Damane said: “I am concerned about lack of professionalism in handling issues of national interest. I am even more concerned about how some reports I listen to on our radios are just opinions dressed as facts which are clearly targeted at discrediting all efforts of the government”.

The minister urged media practitioners to work towards fulfilling their obligation by ensuring that the public receives adequate and balanced information as a critical ingredient of democracy.

Radio, Chief ’Maseribane said, was a medium that had kept its prominence even in the age never ending discoveries, “an accessible platform that we all rely on for democratic discourse.”

This year’s celebration came at the crucial time Lesotho was undergoing media reforms for the first time, according to the minister.

“In hindsight, this gives us the opportunity as media workers and owners to dig deep in our hearts and work towards fulfilling our obligation as a critical ingredient of democracy by ensuring that the public receives adequate and balanced information,” he said.

And closely tied to that was a responsibility by radio workers to provide Basotho with equal access to a wide range of high quality entertainment, information and education.

He said in an effort to promote pluralism and diversity, the government was already embarked on expansion of FM waves project “which gives nationwide reach to all radio stations which have an interest to have such coverage”.

The minister, however, warned that pluralism and diversity of radio should not be confused with broadcasting unfounded information “which is primarily circulated on social media platforms”.

Chief ’Maseribane noted his ministry was in the process of establishing a cyber security bill “which will ensure that it becomes a punishable offence to publish or broadcast information on the internet, which may cause harm”.

He appealed that malicious innuendos should not be condoned in the pretext of pluralism.

The UNESCOM Programme Coordinator – Culture ’Matšooana Sekokotoana emphasised importance of diversification on radio programmes, editorial content as well as productions structures. She said it was important to for the radio programme producers to revisit their content in order to diversify their listenership.

Ms Sekokotoana further quoted from the UNESCO Director-General Audrey Azoulay message for this year’s World Radio Day, noting: “We celebrate the power of radio to reflect and promote diversity in all its forms”.

Through  the  freedom  it  offers, Ms Azoulay indicates radio  is  a  unique  means  of  promoting  cultural  diversity.

“This is particularly the case for indigenous peoples, for whom radio can be an  accessible  medium  for  sharing  their  experiences,  promoting  their  cultures  and  expressing their ideas in their own languages. It is also the case with community radio stations, which relay the concerns of many social groups whose voices would have much less impact in public debate without radio,” Ms Sekokotoana read from the director-general’s message.

Mr Qamako Mahao, from LNIG, said his company has always had interest in supporting the media, “because it is only through the media that we are able to assess interests of the people we serve. We therefore highly value the media”.

Meanwhile, speaking on the same occasion MISA Lesotho Chairperson Boitumelo Koloi thanked UNECOM and LNIG for making the World Radio Day events a success with their support. He said he hoped to see change in the radio space in Lesotho going forward.

We Celebrate International Day for Universal Access to Information with Doubt

MISA Lesotho publishes this statement with grave concern as we celebrate, yet again, the International Day for Universal Access to Information (IDUAI) without the access to information law in Lesotho, and under disturbing political developments threatening press...

We Celebrate International Day for Universal Access to Information with Doubt

Thumbs up for Parliament Portfolio Committee on Information!

MISA Lesotho (official) ·
@NewMisa_Lesotho
Thumbs up for Parliament Portfolio Committee on Information! https://t.co/Wr4dABpTmt
View on Twitter
1
3
We use cookies on our website to give you the most relevant experience by remembering your preferences and repeat visits. By clicking “Accept All”, you consent to the use of ALL the cookies. However, you may visit "Cookie Settings" to provide a controlled consent.
Cookie SettingsAccept All
Manage consent